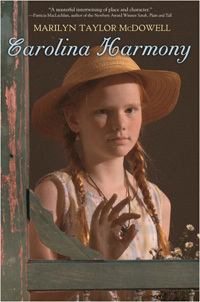 Available to download on your Kindle or other reading device.

They'd been having so much fun. Mr. Ray was telling stories with hilarious endings, contorting his face into the silliest expressions as he acted out one character after another. She'd gotten to laughing so hard she had to hold her belly. Even Mr. Ray was bent in two. All the while, he was teaching her how to drive the tractor.

Mr. Ray said it was not too late to turn this hillside into a field of cabbages, and then he went right into a story about a family of cabbage heads. That got Carolina laughing all over again. They made each other hungry talking about spicy cabbage relish and a crock full of sauerkraut. They agreed they would have a plentiful harvest come October. Mr. Ray said it was certain to be hard planting in this field, what with the rise and all, but you had to make the best of what you were given and appreciate the blessing. Carolina figured Mr. Ray to be the most thankful man she'd ever met.

He let her hold the steering wheel and then he showed her how to use the clutch. Her heart swelled with his praise – "You're a good learner. Aye, you're a natural." She drove at a slow and even speed, dragging the wooden stoneboat over the plowed field. After a while, Mr. Ray hopped down to the ground and let her drive all by herself.

Carolina felt on top of the world as she looked down from her perch on the tractor seat, holding that big steering wheel in her hands. Mr. Ray walked alongside in the furrows, picking up rocks in the overturned soil that were bigger than his fist and tossing them up onto the stoneboat. She steered the tractor around a large boulder. Mr. Ray began working at dislodging it. As the distance between them grew, she heard him yell, "Drive the length of this row and then stop."

Carolina figured she'd show Mr. Ray what a good driver she was. She knew she could turn the tractor around. Why, it would be simple. Didn't he say she was a natural? She shifted gears and pressed her foot on the gas, heading up the rise. She heard Mr. Ray holler and she hollered back, "I can do it!" Then everything went wrong at once.

A jerk, a bang, the tractor rising, her hands leaving the steering wheel as if a force was pulling it away from her, and out of the corner of her eye, she saw Mr. Ray running as fast as he could.

She remembered how strange it was, how at the moment when she flew off the seat, it was as if she was floating in slow motion. First she saw sky, then mountain peaks, then trees and hill and field. She remembered the scream dying in her throat as she saw the underside of the tractor, thinking she was about to be crushed. But before her back hit the dirt, she was caught in his arms, yanked away, just about thrown. She landed with a solid thump. It knocked the wind out of her. She lay still, as if she'd been struck deaf and dumb. She remembered staring up at the soil caked between the wide ridges of the tire and seeing a cloud floating in the blue sky above it. Finally, she rose onto her elbows, uncertain whether ten seconds or an hour had passed.

That was when she saw Mr. Ray.

After that, all she remembered was running. Get help! Every other thought in her head moved out of the way.

Carolina Harmony
Click here to read an excerpt from the book. I hope you enjoy the preview.